The global meeting place for all of Caribbean Aviation


-- Posts Summary: Airlines and Airports operating and not operating --

News about this airline - please include a link to the source as well as the article text itself.
Post Reply
First unread post • 1 post • Page 1 of 1 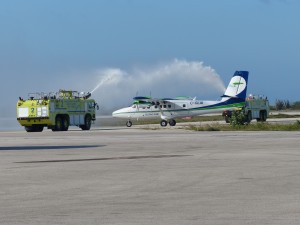 The small but very popular Divi Divi Air has reached another milestone. The first of two De Haviland DHC 6-300 ‘Twin Otter’ aircraft has arrived yesterday at the Hato Airport in Curaçao. Most passengers on the Dutch Caribbean islands are familiar with the aircraft as they are currently used by Sint Maarten-based Winair, to serve destinations like St. Eustatius, Saba and St. Barths. Twin Otters were in the past however also used on the routes between the ABC islands by ABC Commuter (a subsidiary of ALM Antillean Airlines) and Dutch Caribbean Airlines (DCA).

The two aircraft purchased by Divi Divi were until recently in service with domestic Canadian airlines Air Inuit and Air Labrador.

The use of the larger Twin Otters (19 seats) would mean a significant increase in capacity compared to the Islander aircraft Divi Divi is using so far. Although the Islander can officially accommodate 9 passengers, usually no more than 8 passengers are booked per flight, in order to also accommodate luggage and freight.

Divi Divi Air was founded in 2001 by German Hans Barth. The company, which initially started with a single 7-seat Cessna airplane, quickly P1080738gained a loyal customer base by an excellent on time performance, something that was unheard of at the time of the now-defunct ALM Antillean Airlines.

Divi Divi director Germaine Richie-Durand indicated to Curaçao Chronicle that the intention was to not only expand the service between Curaçao and Bonaire but to also start serving Aruba with the introduction of the new aircraft.

The expansion with the new aircraft can be considered good news for especially Bonaire which, so far, was heavily dependent on troubled InselAir. Many on Bonaire would especially like to see the return of direct flights between Bonaire and Aruba.
Top
Post Reply
1 post • Page 1 of 1